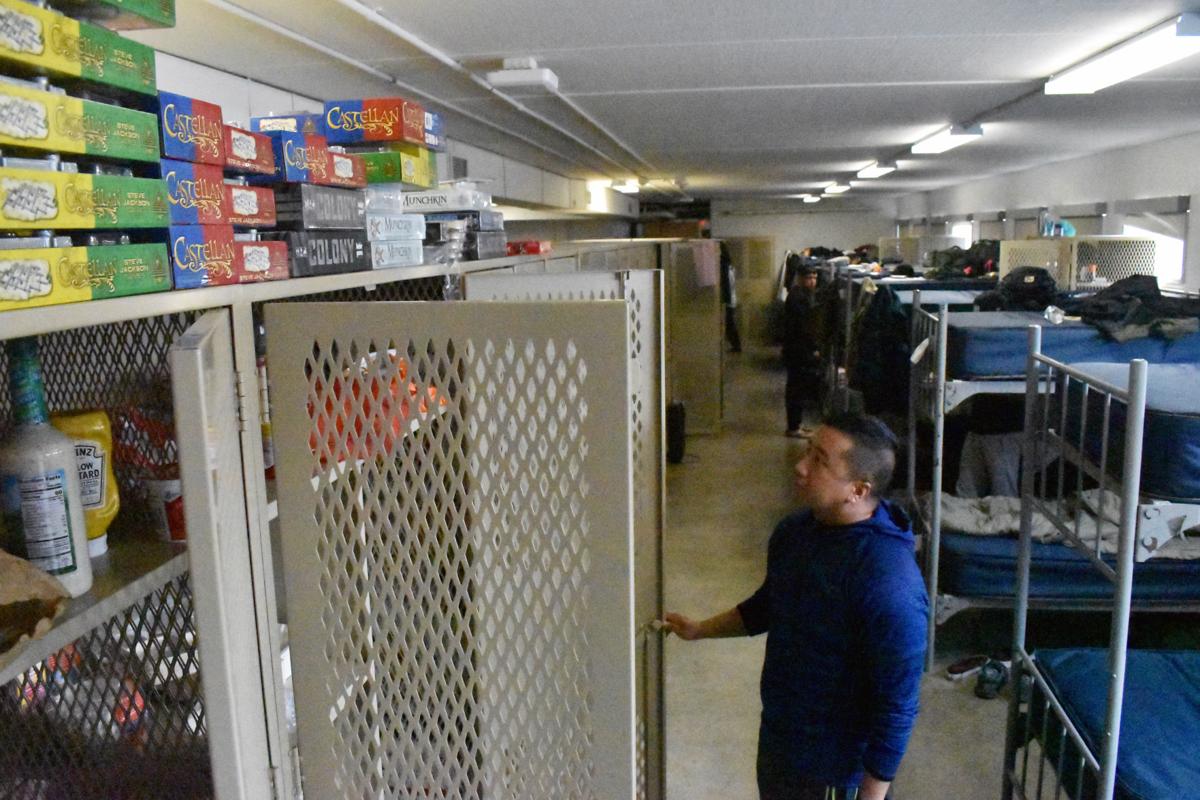 Maj. Alexander Rodriguez, commander of the 647th ETOE, looks inside a wall locker in his unit’s temporary quarters for male Soldiers Monday. Rodriquez and his 40 other unit members have been in quarantine at North Fort Hood since March 13. They end their quarantine this week, and will begin their demobilization processing. 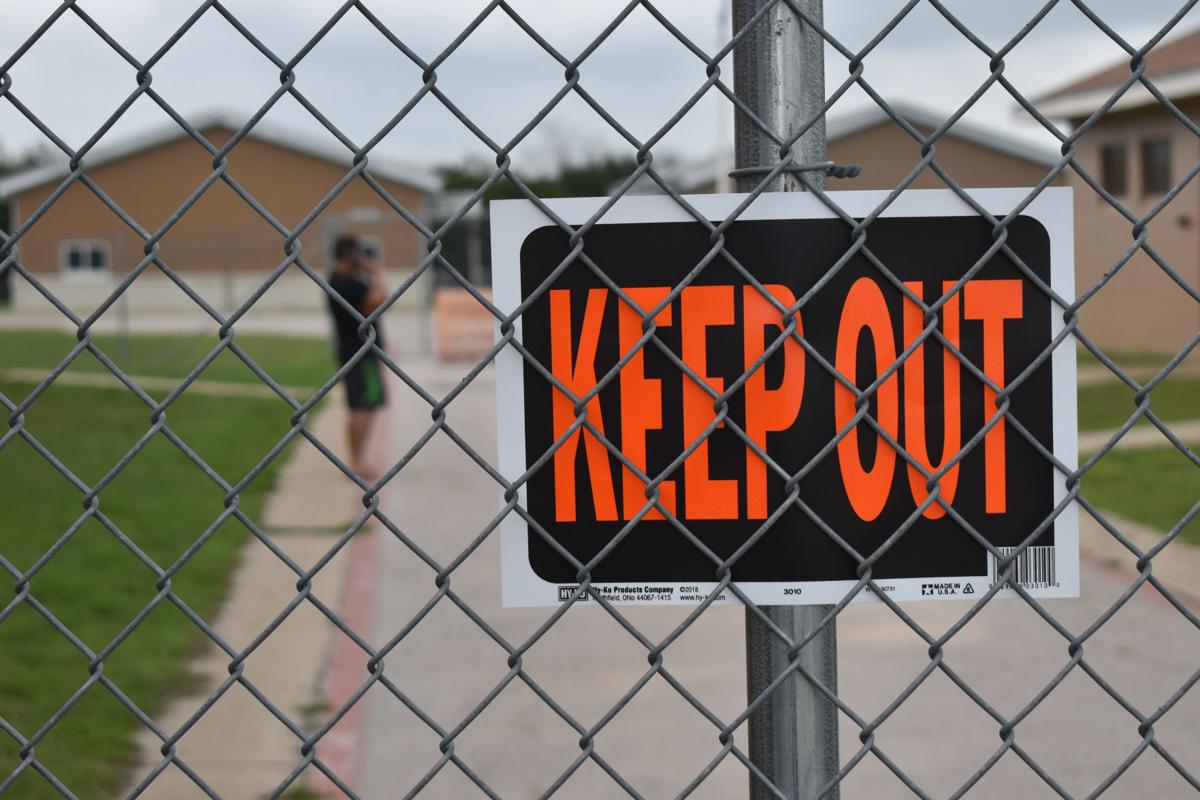 Though behind a fence in the quarantine area at North Fort Hood, a Soldier is a able to keep in contact with loved ones via cellphone. All returning troops from overseas areas must undergo a 14-day quarantine. 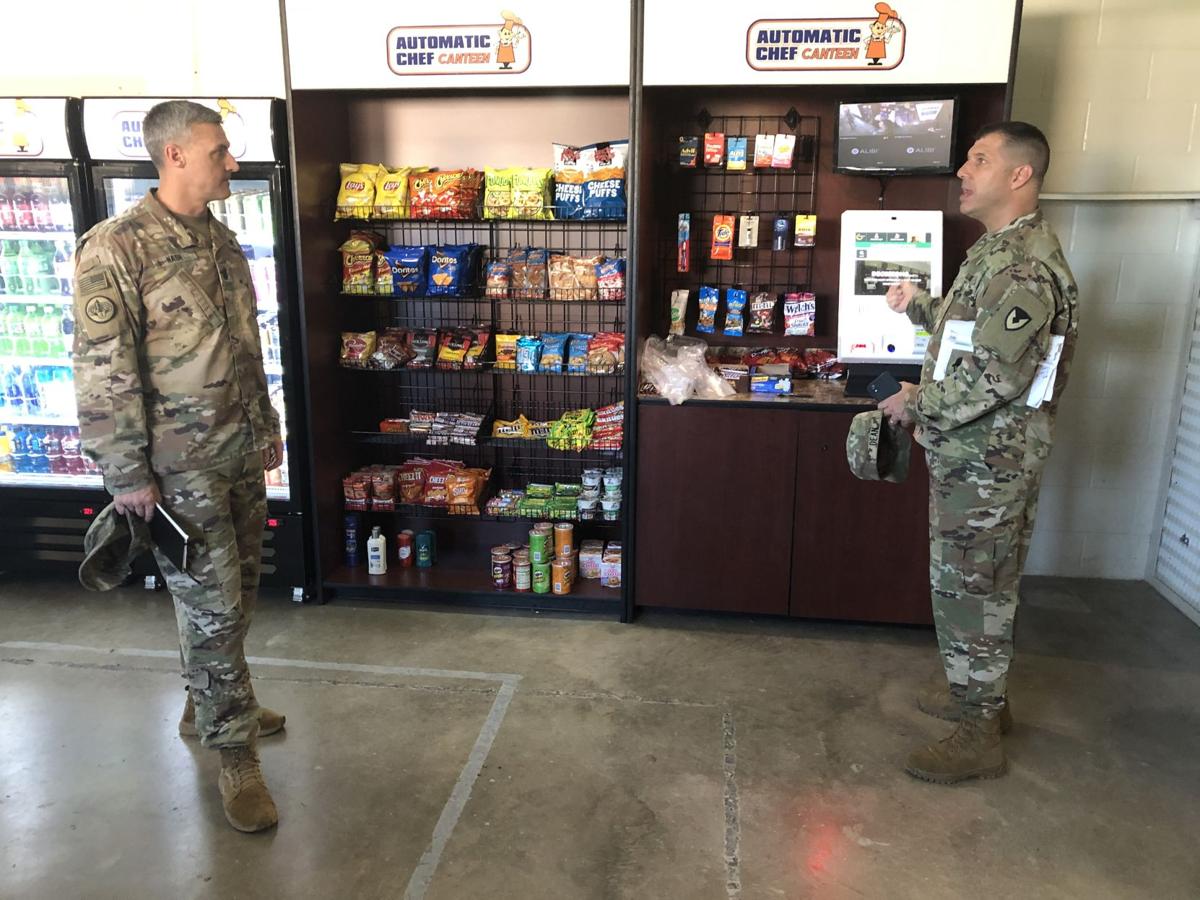 Maj. Alexander Rodriguez, commander of the 647th ETOE, looks inside a wall locker in his unit’s temporary quarters for male Soldiers Monday. Rodriquez and his 40 other unit members have been in quarantine at North Fort Hood since March 13. They end their quarantine this week, and will begin their demobilization processing.

Though behind a fence in the quarantine area at North Fort Hood, a Soldier is a able to keep in contact with loved ones via cellphone. All returning troops from overseas areas must undergo a 14-day quarantine.

Currently, six units are settled in at North Fort Hood, completing their demobilization processing before returning to their home states.

That demobilization processing time has been extended due to a Department of Defense-directed 14-day quarantine for the units filtering through the Great Place from their overseas deployments. Their first two weeks on American soil are now spent in quarantine.

“We need to take steps to protect our troops, to protect family members and the communities that these Reservists live and work in,” Col. David Dean, the commander of the Hood Mobilization Brigade, which oversees mobilization and demobilization operations at North Fort Hood, including the quarantine of more than 500 troops, said. “We just want to make sure we’re not spreading this (coronavirus) to their communities.”

The 647th Expeditionary Terminal Operations Element, based out of Joint Base Lewis-McChord, Washington, has been at Fort Hood since redeploying from Germany March 13. These 41 troops were the first unit quarantined at North Fort Hood.

“We found out when we landed on the ground in the U.S.,” Maj. Alexander Rodriguez, the unit’s commander, explained, “so, it was unexpected.”

While this unexpected extension to their stay at North Fort Hood means a delay to their homecoming, the seriousness of the pandemic, and the Army’s response isn’t lost on these Army Reserve Soldiers.

“We were all surprised at first, we didn’t know what the process would be,” Rodriguez said. “There was some anxiety about it, but … we were able to adjust. We knew we’d be taken care of once we got on (the) ground. We’re all on the same team.”

Dean’s unit took on their mobilization mission here just a week prior to the quarantine order going into effect. He and his team has had to hit the ground running.

“With it happening so fast, are there challenges that come along with this? Absolutely, but I will tell that between the Soldiers that are quarantined, between the cadre, between the civilian (garrison) directorates that are here, we are making progress to make these the best accommodations that we can because this really is an inconvenience in their demobilization process,” Dean said.

This isn’t the first time North Fort Hood has been used to quarantine troops returning from overseas. In 2014, troops were quarantined here for 21 days upon their return from supporting the fight against the Ebola virus in West Africa. Initial plans were based on that model, but tweaks to improve the process are on-going, Dean said.

“In my mind, I think we’ve come a long way in a short period of time,” he added.

Rodriguez’s unit occupies two barracks buildings, one for males, the other for females. The barracks are open-bay areas lined on both sides by bunk beds with the center aisle filled with lockers.

A midday walk-through Monday of the male barracks revealed troops relaxing in their bunks, playing video games or surfing the internet on personal computers. Board games line the tops of the lockers, donated for the troops to use as they wait out their quarantine. Outside the barracks were tents where hot meals are delivered three times daily, a basketball court where the troops can exercise and a running track is nearby, as well.

“The Army model for demobilization is 14 days,” Dean explained. “Fort Hood, traditionally, will get you out in seven to 10 days. The process has now expanded to the 14 days (of quarantine), plus the (demobilization) time afterwards. What we’re doing is we’ve taken steps to reduce those seven days. Once they are out of quarantine, we can get them out as quick as possible. That’s the goal.”

While in quarantine, troops are screened twice daily, and if a medical situation should arise, the staff of Troop Medical Clinic 14 at North Fort Hood are there to respond.

“Our team provides them with all their medical support,” Capt. Christina Petersen, a physician’s assistant serving as the officer-in-charge of the North Fort Hood Medical Clinic.

“The biggest thing we want to reiterate is that they are coming home,” Petersen said. “They don’t have the luxury of going right to their home of record. They have to be demobilized first. We are now their temporary home for that process.”

Rodriguez said when the quarantine is over, and the demobilization process is complete, he, along with his 40 troops will be elated to be heading back home to Washington state. So will Dean.

“I’ll be super happy,” he said. “As a Reservist myself, who has gone through this (demobilization) process, I just wanted to get home to be with my friends and family, right? To be delayed here is just something we have to deal with, but it will make it a little nicer getting home.”

We were all surprised at first, we didn’t know what the process would be. There was some anxiety about it ...