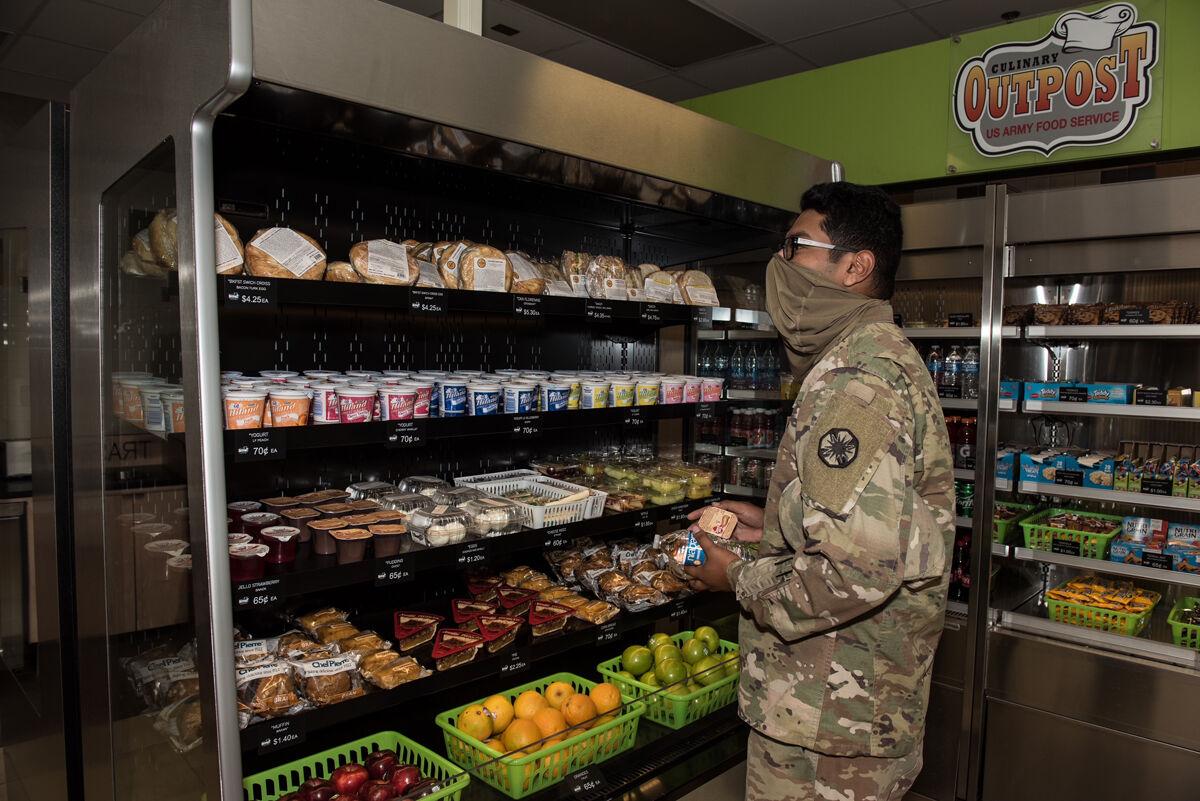 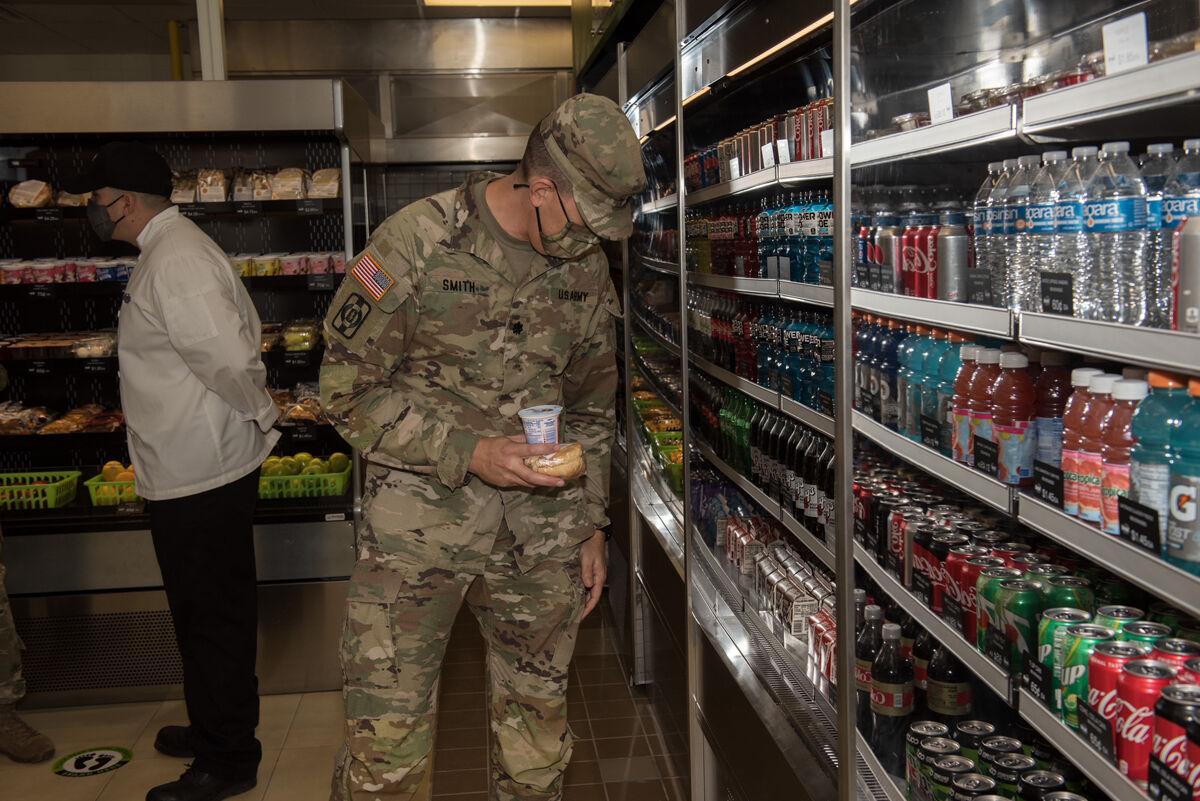 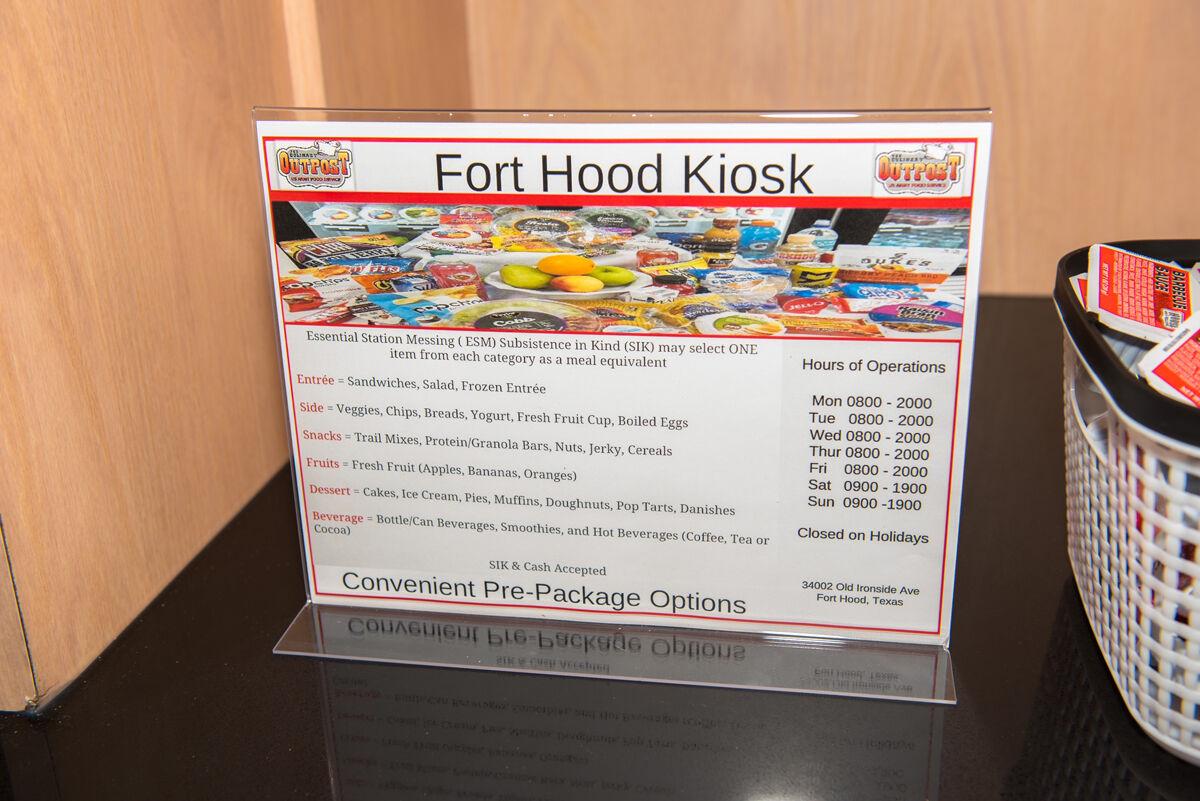 The Culinary Outpost Kiosk is located at 75th Street and Old Ironsides Avenue and is cash only. Patrons will be able to choose a food item from each category of entree, side, snack, fruit, dessert and beverage.

The Culinary Outpost Kiosk is located at 75th Street and Old Ironsides Avenue and is cash only. Patrons will be able to choose a food item from each category of entree, side, snack, fruit, dessert and beverage.

People are the Army’s number one priority. As the Army continues modernization efforts across the force, finding better ways to take care of Soldiers also involves transforming the Army Food Service Program.

“As the Army moves into the new modernization initiative, it is important to be able to compete with the civilian restaurant offerings so that Soldiers have more options available outside of the dining facility,” Warrant Officer 1 Heidi-Ann Wallace, 13th ESC food advisor, said.

Because of a Soldier’s varying mission requirements, the kiosk also extends operations outside of normal DFAC hours.

“The kiosk will be open all day,” Tim Woods, Fort Hood food program manager, said. “Sometimes, Soldiers don’t have the opportunity to come to a regular facility to eat during those breakfast, lunch or dinner hours. This will give them the opportunity if they have different schedules to subsist as opposed to going to other options off-post.”

In order to better provide service to the Soldier, the kiosk will also be incorporated into a mobile truck to help fuel the fight anywhere Soldiers live, work and train. The mobile platform is capable of feeding up to 200 Soldiers per meal period, and one food truck requires three to four culinary specialists to operate.

As Soldiers become accustomed to the variety of options they receive at the kiosk, leaders will pay close attention to Soldier’s reactions and feedback to help improve their overall experiences.

“As Soldiers come in and there are things they don’t see, we can do some surveys to appease their selections and their wants,” Woods said.

Sgt. Lucas Kraat, 553rd FFC, will serve as the noncommissioned officer-in-charge of the kiosk operations. Kraat has been a culinary specialist for three years, and looked forward to the experience.

“I’m excited for Soldiers to have options outside of normal DFAC hours,” Kraat said. “Being able to learn how many options this field has is also a great opportunity.”

61st Quartermaster Battalion’s Command Sgt. Maj. Keysa Chambers, had been waiting for the kiosk to open and knew excited for the potential of things to come.

“Today is a great day,” Chambers said. “The kiosk is just one of many Army Food Service modernization programs to come.”

Putting this program together was hard work, but Chambers appreciated everything the Soldiers put into the planning and execution.

“You all do what you do best and that’s make it happen,” Chambers said. “Thank you so much for everything you do.”

The Culinary Outpost Kiosk is located at 75th Street and Old Ironsides Avenue and is open Monday-Friday from 8 a.m. to 8 p.m., Saturday-Sunday from 9 a.m. to 9 p.m. and closed on holidays. The kiosk is cash only and patrons will be able to choose a food item from each category of entree, side, snack, fruit, dessert and beverage.