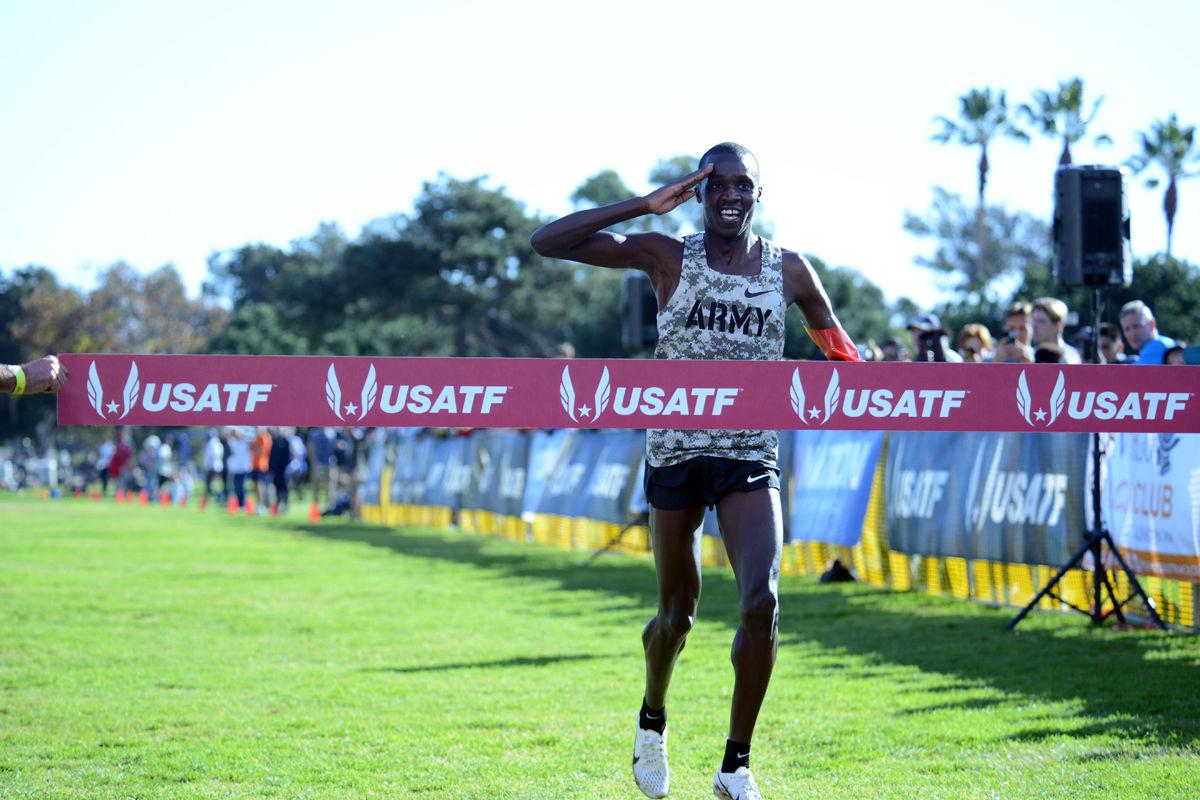 “We tried to push each other,” Rotich said of jostling Bor for the lead halfway through the race.

Five of the Army runners jumped out ahead of the pack at the start with a fast first lap, running as a group with Bor in front. By the end of the second lap of the five-lap course, Bor and Rotich had a 15-second lead on Lalang and other teammates.

Rotich, Bor and Lalang all grew up in the town of Eldoret, Kenya, and went on to attend college in the USA, becoming university track stars.

Rotich attended the University of Texas at El Paso, where he was a three-time NCAA champion in the 3,000-meter steeplechase. He hopes to qualify for the summer Olympics in the steeplechase and said he thought changing his workout length with cross country could help increase his speed.

Rotich had not run cross country in five years since college, but said discipline was the key to his success in the race.

“I learned that for you to succeed in any sport, the best thing to have is the discipline,” he said. “You’ll find everybody can do the mileage, but if you don’t have the discipline, you wake up in the morning to train … it’s going to be hard.”

Bor said he began running at an early age when he had to run eight miles to elementary school. He attended the University of Alabama where he represented the school in the World University Games. He has been a member of the Army World Class Athlete Program, or WCAP, since 2015, competing in 5,000-meter and 10K races.

This was Bor’s first competition since suffering a fractured left hip 10 months ago. One month after taking second place in last year’s cross country championship, he fell during a race in Denmark and spent six months rehabilitating at the Olympic Training Center in Colorado Springs.

This race he developed a blister on his big toe. “I didn’t feel it until the last maybe two laps to go. Every step I was feeling it,” he said, but the last 800 meters the hurt really kicked in.

“You got to fight on,” he said. “The discipline just kept me in the fight … no matter what happens, you just want to finish. You can’t quit.”

Bor hopes to compete in the Olympic 5,000-meter race this summer but first must get a qualifying time next month in Boston before going on to the U.S. Olympic Track and Field Trials scheduled for June in Eugene, Oregon.

Bronze medalist Lalang ran track for the University of Arizona, where he broke multiple NCAA records and was an eight-time NCAA champion. He joined the Army in 2017. He won the Army Ten-Miler in October and hopes to qualify for the Olympics this summer in the 10,000-meter competition.

Army women also took home a team gold, despite their first runner – Capt. Jennifer Hannigan of Camp Humphries, South Korea – finishing fourth with a time of 40:31. Team medals were determined by placement of the top four women from each service.

While the Marine Corps’ Carrick finished 47 seconds in front of Air Force’s 2nd Lt. Corina Gillespie, the Air Force team took the silver medal. Gillespie earned an individual silver in the Armed Forces category with a time of 38:56.4.

The Marine Corps’ Carrick finished first for the Armed Forces and 14th overall in the USATF race.