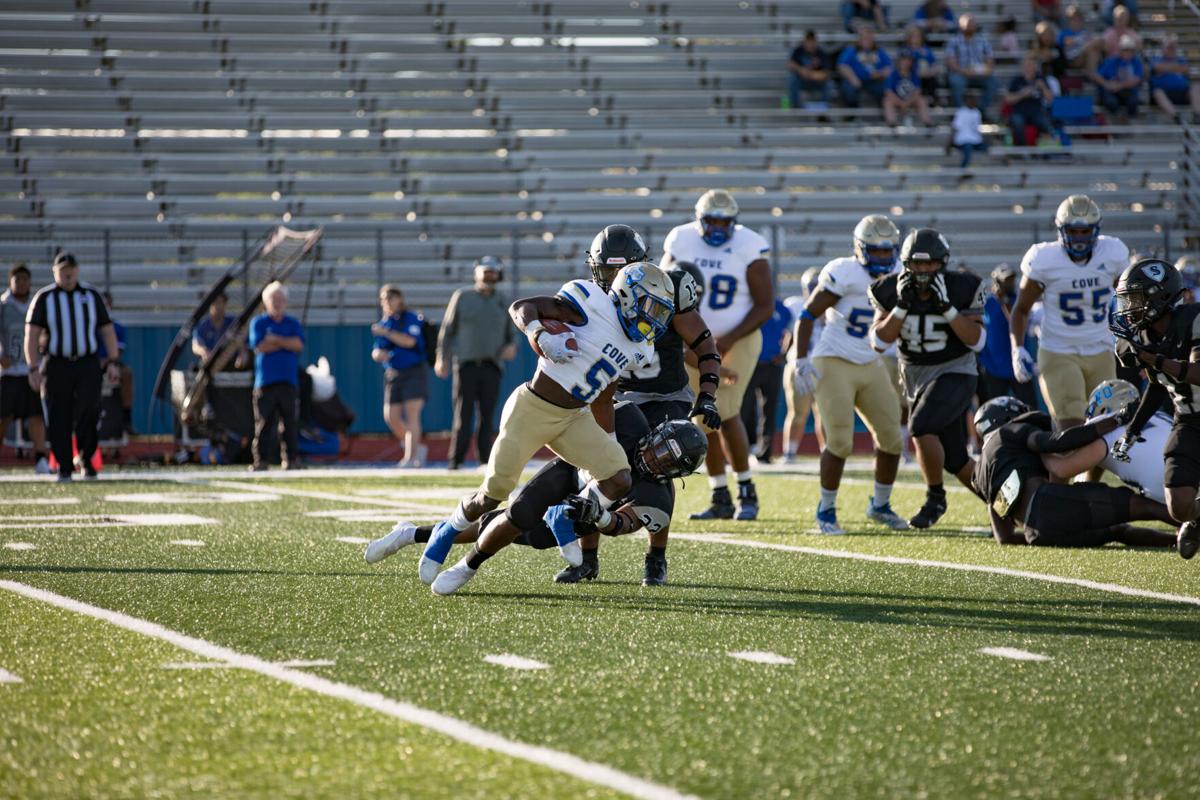 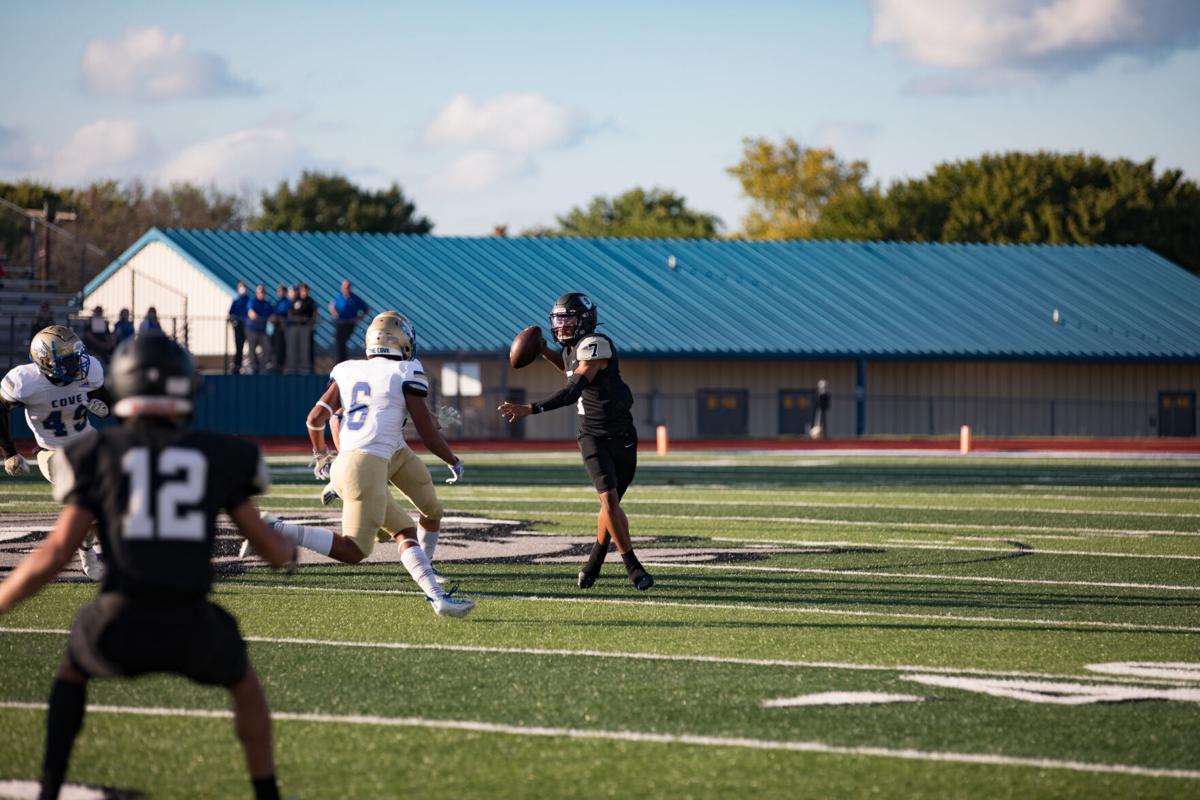 Shoemaker senior quarterback Omari Evans (7) looks to pass during the Shoemaker versus Copperas Cove, Friday, in Bulldawg Stadium. The game began on Thursday, but was postponed due to weather. 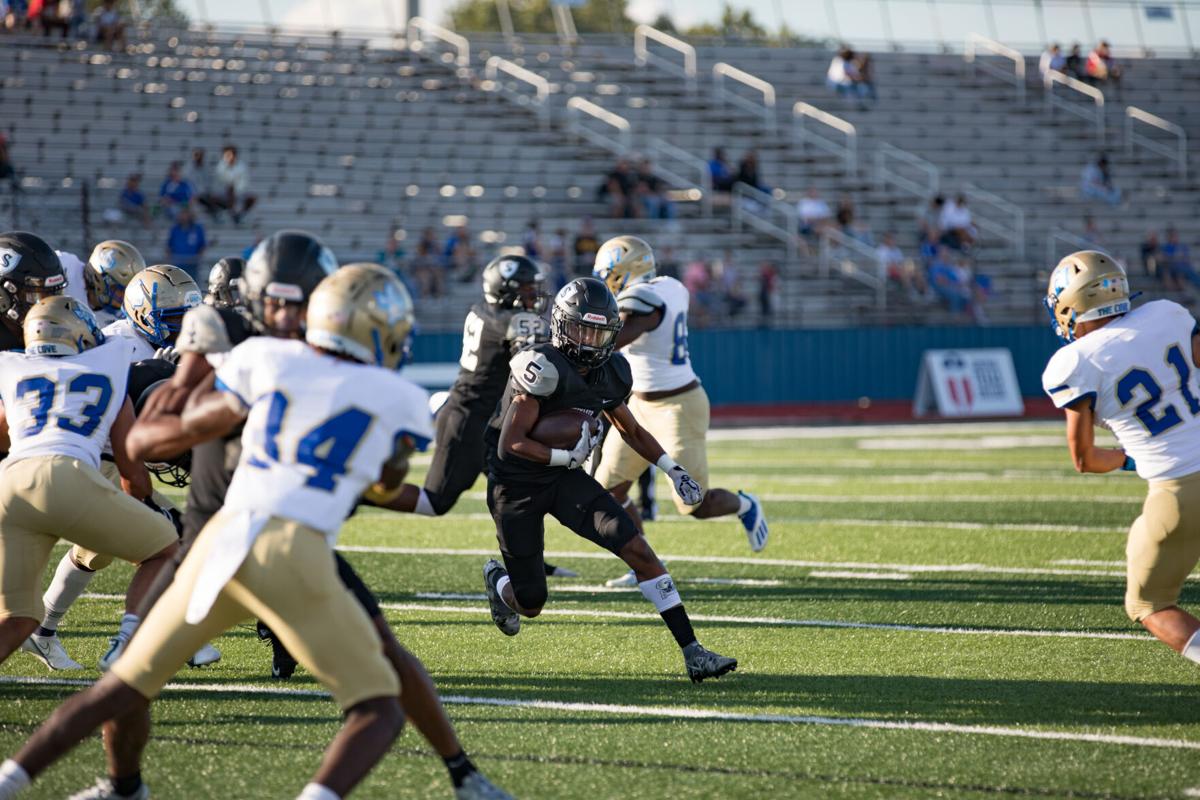 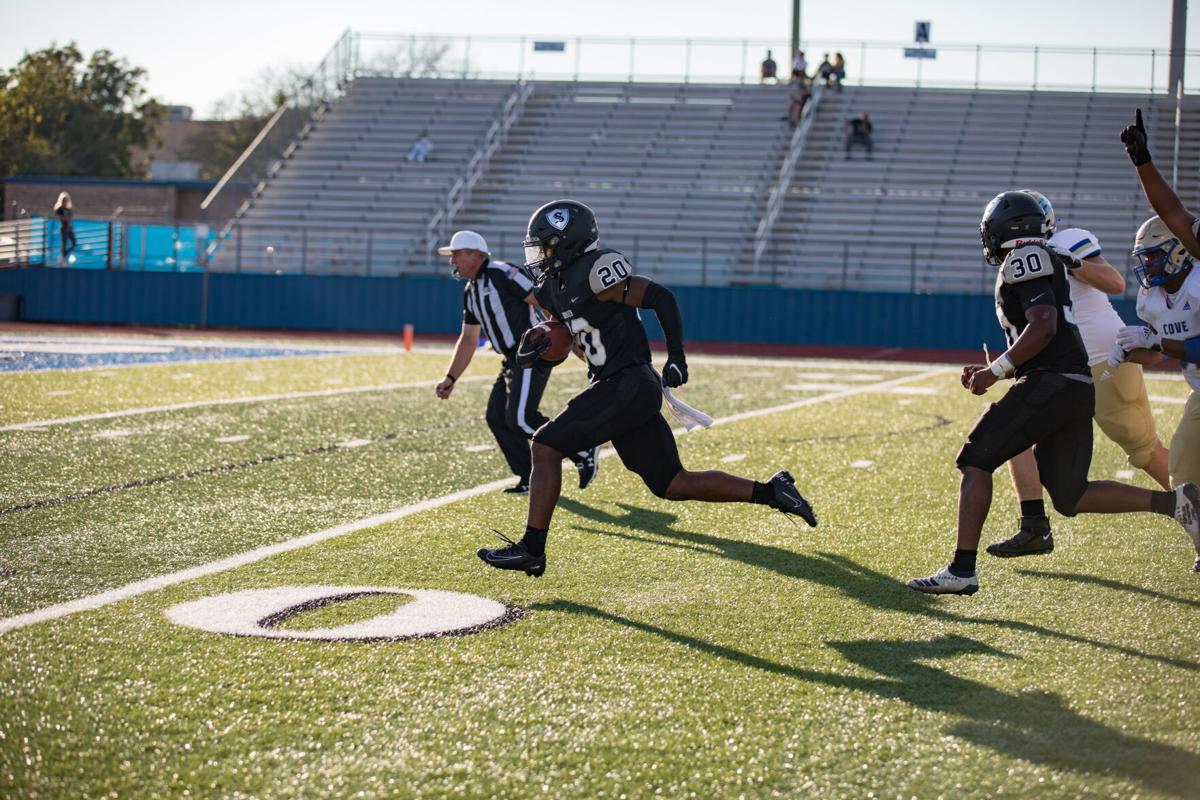 Shoemaker junior defensive back Ronnie Collins (20) recovers a fumble and runs if back for a Grey Wolves touchdown Friday. 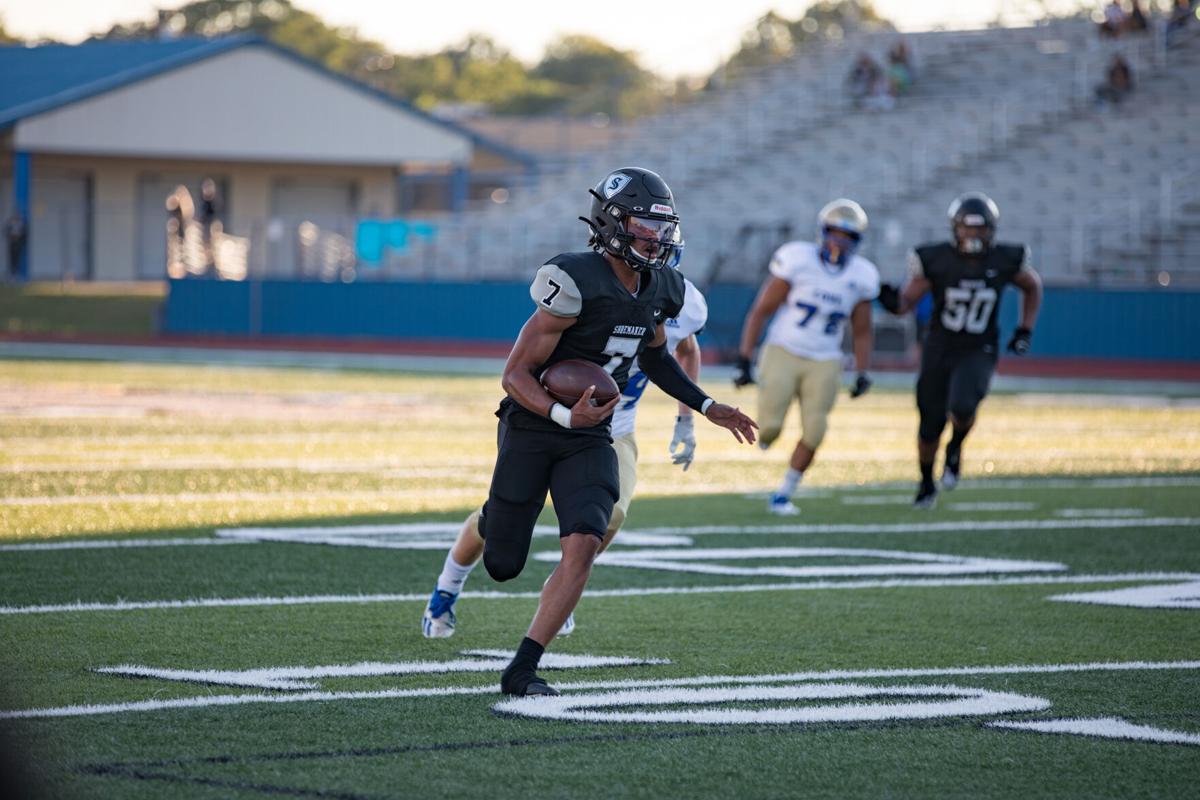 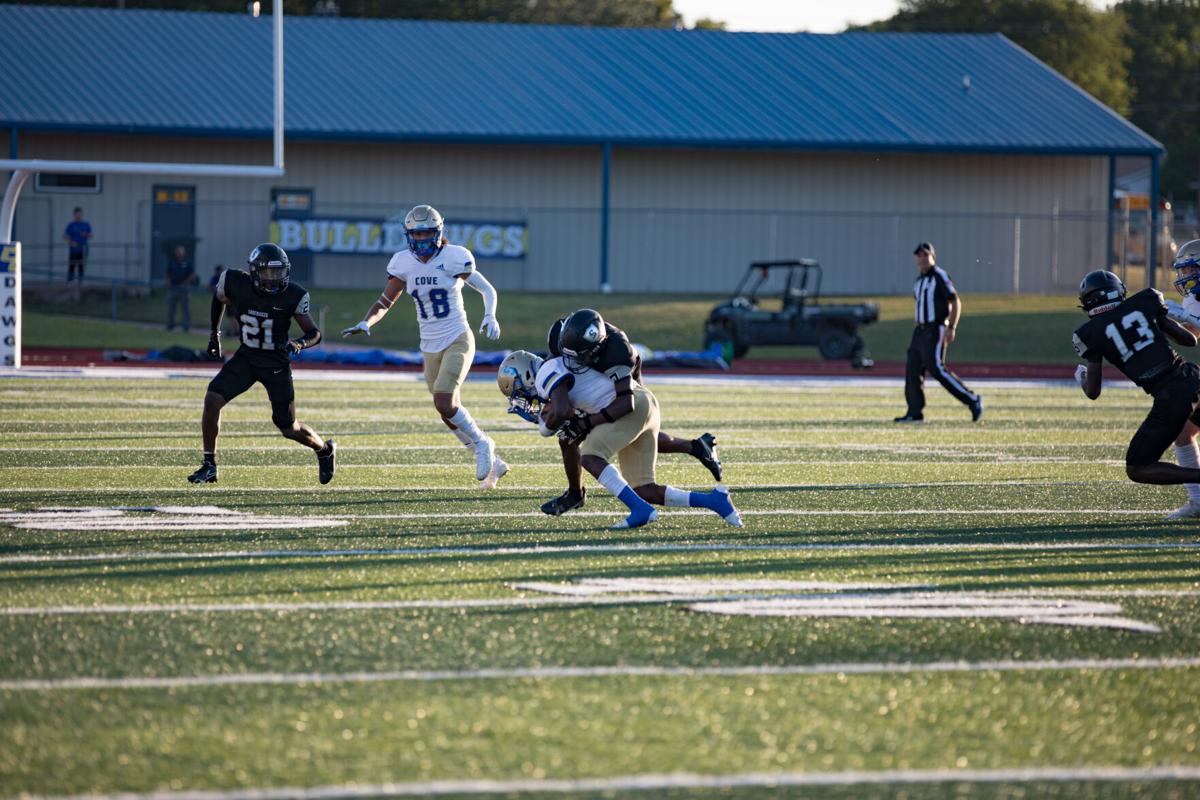 Shoemaker senior quarterback Omari Evans (7) looks to pass during the Shoemaker versus Copperas Cove, Friday, in Bulldawg Stadium. The game began on Thursday, but was postponed due to weather.

Shoemaker junior defensive back Ronnie Collins (20) recovers a fumble and runs if back for a Grey Wolves touchdown Friday.

The game started on Thursday evening in Leo Buckley Stadium, but just a few plays in, a lightning delay turned into a complete postponement of Shoemaker’s homecoming game. The game picked up right where it left off, Friday, only on the Bulldawg’s turf.

Though the Grey Wolves managed to win, they made several mistakes throughout the game that head coach Toby Foreman was determined to address.

“I’m glad we won the game, but we’ve got to clean up. We had too many turnovers and some lackadaisical plays,” he explained. “I think we thought we were going to show up and play a seven-on-seven game and it turned out to be a 6A varsity district football game and that’s what the difference is. We’d better clean up in a hurry or else we’re going to be losing the game next week and that’s not what we want to do. We want to continue this little (winning) streak we’ve got going and progress in the district.”

There were several turnovers, on both sides, many of them fumbles. Copperas Cove never led but managed to tie up the score at 21-21 in the third quarter. However, Shoemaker picked up momentum in the fourth quarter, gaining a more comfortable lead.

In the Grey Wolves defense, they had many distractions this week. A good distraction was the fact it was their homecoming game, and everyone was celebrating all the fun things that come along with that. However, the weather postponing the game until Friday, putting them on someone else’s field without their band and many of their fans cheering them on, were all unwanted distractions.

Foreman was adamant that despite the distractions, when the game starts, nothing else matters and the Grey Wolves know that.

“Once the ball’s kicked off, it doesn’t matter if there’s no band or (if the) homecoming dance is going on and all that stuff – it’s just football. We didn’t take care of our business tonight like we should have and I’m disappointed in some of these guys,” he explained. “We’ll look at film, I may be wrong, and I may be apologizing, but I just think it was lackadaisical play and there were some times we could have put them away and we didn’t.”

He commended the Copperas Cove head coach Jason Hammett and the Bulldawgs for their efforts.

“Credit to coach Hammett and Copperas Cove because they beat us up all over the field (and) we didn’t deserve to win that game, but we’re very lucky. Very lucky,” he said.

The Grey Wolves will take on the Bryan Vikings in Bryan on Friday.