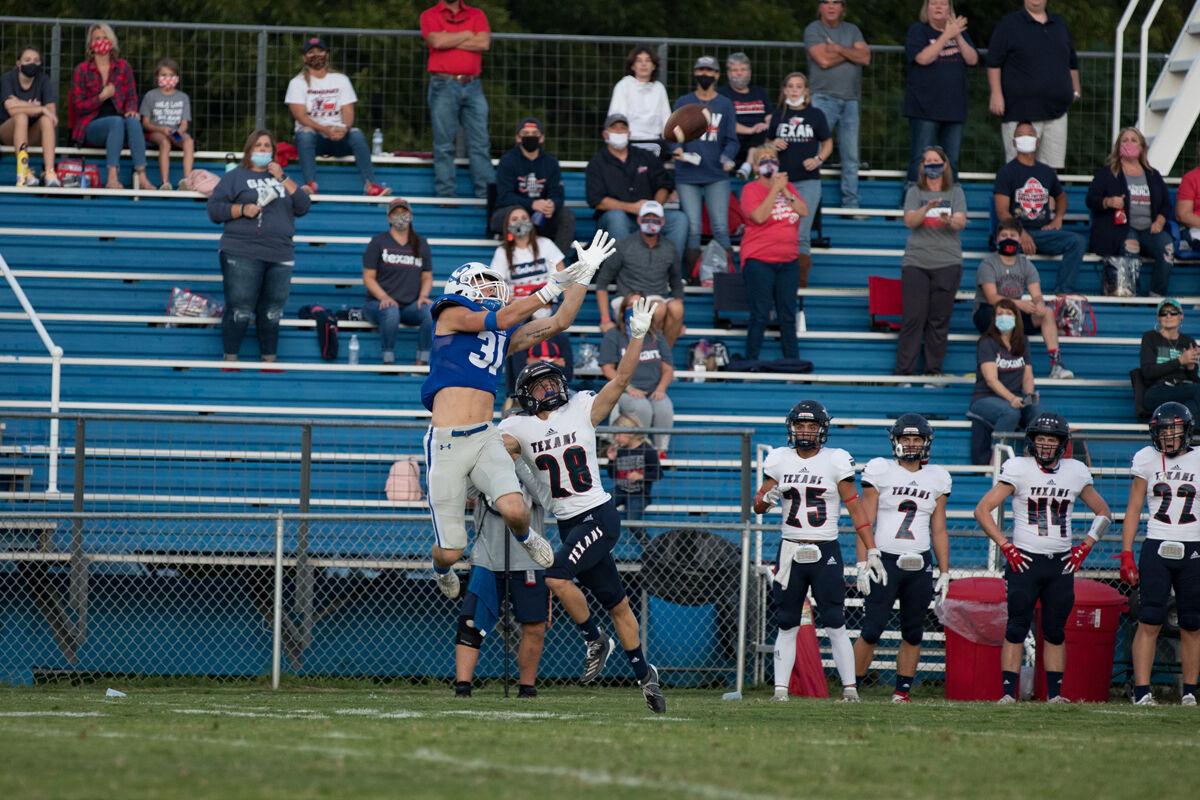 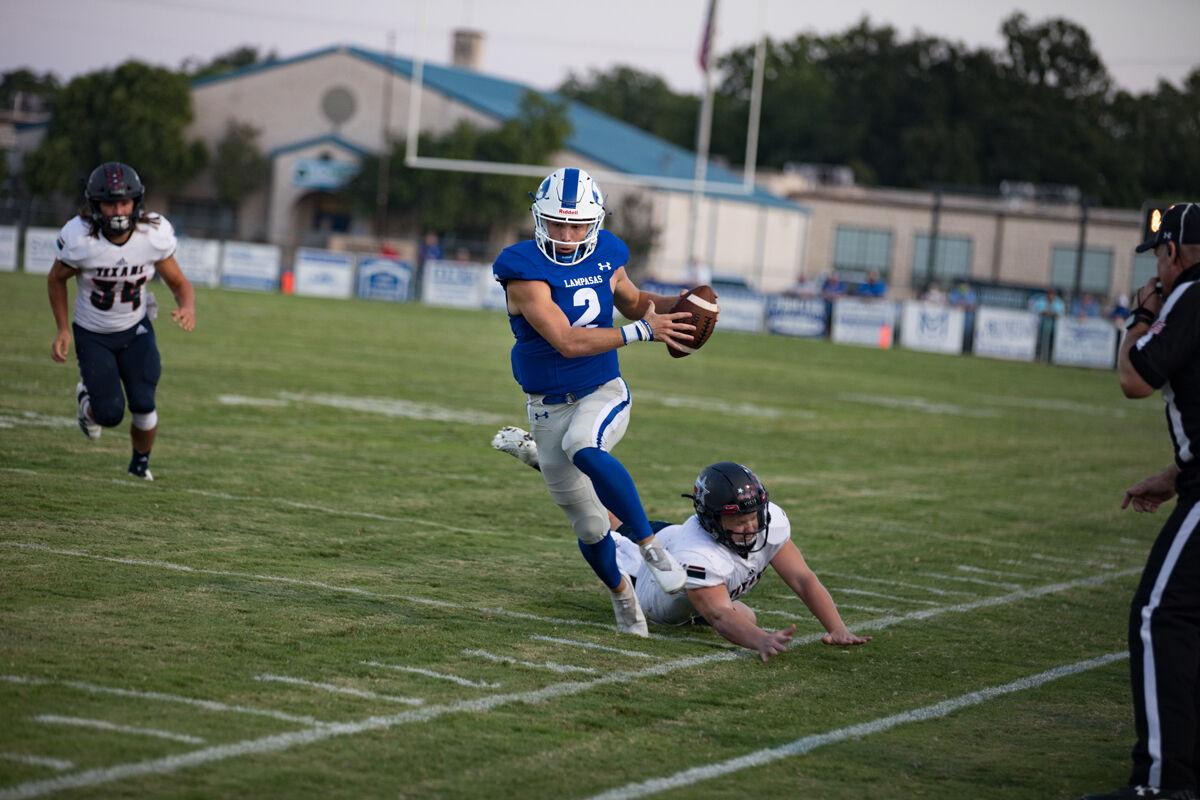 Lampasas senior quarterback, Ace Whitehead, races down the sideline in Badger Stadium Friday during the Badger’s game against the Wimberley Texans. 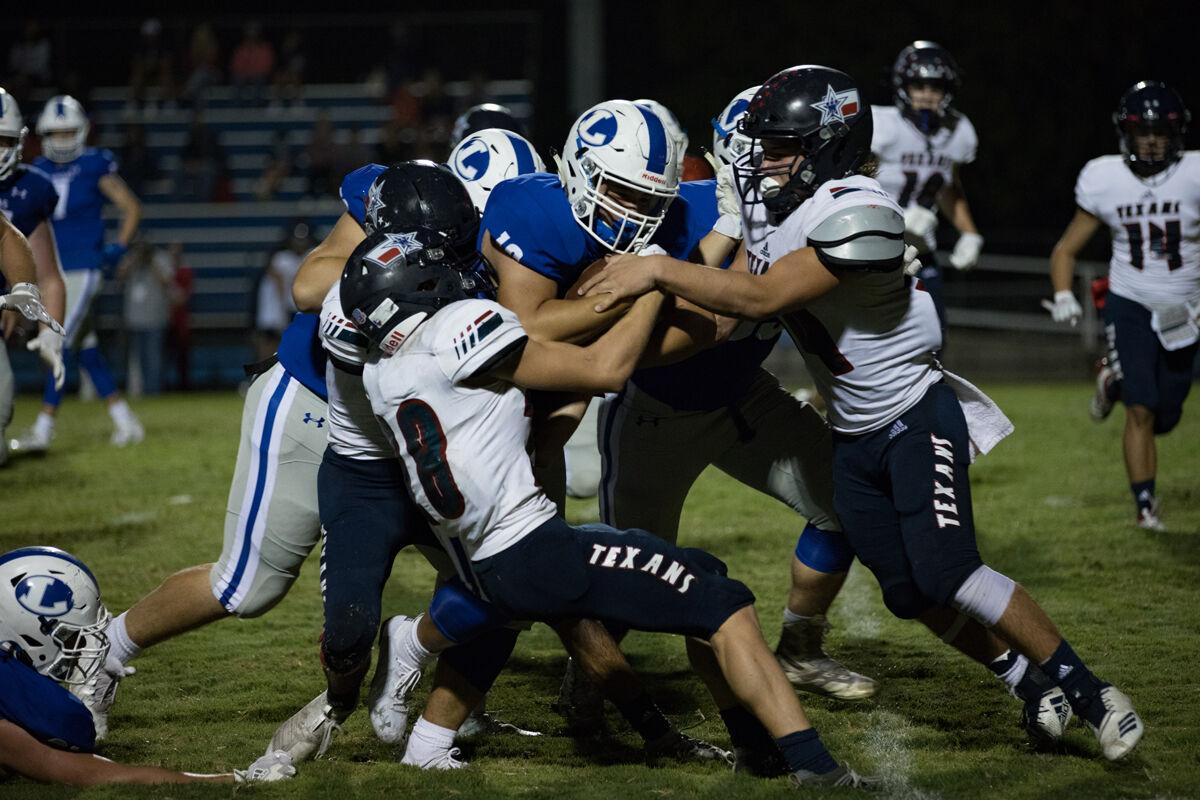 Lampasas senior defensive lineman Joseph Whitehead takes a turn on offense as the running back and pushes through some Texans in Badger Stadium Friday. Lampasas beat Wimberly 57-28.

Lampasas senior quarterback, Ace Whitehead, races down the sideline in Badger Stadium Friday during the Badger’s game against the Wimberley Texans.

Lampasas senior defensive lineman Joseph Whitehead takes a turn on offense as the running back and pushes through some Texans in Badger Stadium Friday. Lampasas beat Wimberly 57-28.

LAMPASAS — The Lampasas Badgers are now 3-0 after beating the Wimberley Texans 57-28 in Badger Stadium Friday.

The Badgers came out and did what they do best – put on a very enjoyable show for everyone in attendance.

Still, head coach Troy Rogers was humble, admitting that they still have a lot of work for the Badgers to be at their absolute best.

“We had lots of penalties and dropped balls and things like that we’ve got to fix. That’s one of the things about not having seven on seven from the spring and the summer – the timing is off. It’s not just us, I’m sure it’s everybody,” Rogers said. “We missed out on all that time throwing and catching. We’re behind on that, and we’ll catch up, and we’ll hopefully get that part of our game cleaned up, but again it’s just one of those COVID things. We’ve just got to have a little bit more time to get that consistency together.”

Rogers said that the Badgers worked hard despite the setbacks COVID-19 presented them with, and Rogers is proud of how hard they’ve worked.

“We didn’t get to do all the offseason and everything else everybody didn’t get to do,” Rogers said. “Our kids put in the work. They showed up this summer. They did the things we asked them to do in the spring. They’re hungry, and you’re seeing the fruits of their labor right now.”

He admitted during the preseason they were still trying to get the team to mesh together and though an outsider looking in might think they’ve done that quite quickly, Rogers thinks they have a little ways to go, but they are headed the right way.

“I think we left some points out there, we had some third down penalties, gave them first downs, and we had the turnover. We’ve got plenty of things to fix and work on,” Rogers stated. “We’re a long way from where we need to be, but these guys, they believe, and these coaches are doing a great job of coaching them up and getting them to believe in each other. They play as a team. We’ve still got to gel a little bit more, but I like the direction we’re heading.”

Rogers is still proud of how his team faced Wimberley, who has been a big contender in the past.

“This (Wimberley) is a state finalist from last year with eight starters back on defense and six back on offense. They’re well coached, they’re solid. They don’t beat themselves. I knew it was going to be a lot of competition all night long, and I think it was. They responded, and I thought we did a good job of responding back. That’s what you want – you want to play complimentary football. We’ve still got a little ways to go on that, but I thought the back and forth was pretty good.”

“We’re going to celebrate this one. We’re a one game at a time type of team. We’re going to focus on our opponent, and we’re going to study them when we do our scouting report on Monday with the kids, and so it’s always about focusing on who we’re playing. And then after that, it’s about focusing on us,” Rogers said. “It’s about making sure we clean up what we need to. That’s kind of the mentality. Next week, we’ve got China Spring at China and they’re a really good football club, and that’s just another one on the schedule that’s going to be very tough.”